Documentary film “Becoming Who I Was”

I would like to introduce a documentary film that made a strong impression on me. The film “Becoming Who I Was”(2017), created by a Korean production, depicts a boy in northern India, Ladakh region, who is discovered to be the reincarnation of an esteemed, high-ranking Tibetan monk, and his aging godfather takes him on a journey to Tibet with beautiful images. The film won many film awards including Banff Mountain Film Festival 2017.

The boy, Padma Angdu, 9, who is believed that he is a Rinpoche (reincarnated centuries-old monk). But he cannot contact the monastery in Tibet that he used to live in his previous life due to Chinese policies. And yet, Urgain planned to take him to Tibet. Then, the two set off on a long and grueling journey for more than two months.

The boy can draw the monastery in Tibet in detail. I have heard about some children who remembered their previous lives around the world. But it seems the memories begin to fade as they grow up.

In HIS HOLINESS THE 14TH DALAI LAMA OF TIBET, it is written about reincarnation as follows.
***
Generally, Buddhists believe that there is no beginning to birth and that once we achieve liberation from the cycle of existence by overcoming our karma and destructive emotions, we will not be reborn under the sway of these conditions. Therefore, Buddhists believe that there is an end to being reborn as a result of karma and destructive emotions, but most Buddhist philosophical schools do not accept that the mind-stream comes to an end. To reject past and future rebirth would contradict the Buddhist concept of the ground, path and result, which must be explained on the basis of the disciplined or undisciplined mind. If we accept this argument, logically, we would also have to accept that the world and its inhabitants come about without causes and conditions. Therefore, as long as you are a Buddhist, it is necessary to accept past and future rebirth.
***
I was moved by the boy’s pure, innocent, and steady behavior. Also, I felt the preciousness beyond words in Urgain’s unconditional love for Padma Angdu. The scene where Urgain leaves Padma, it is difficult to watch without tears. I really wish they would meet each other again. (H.S) 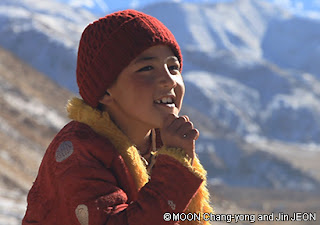